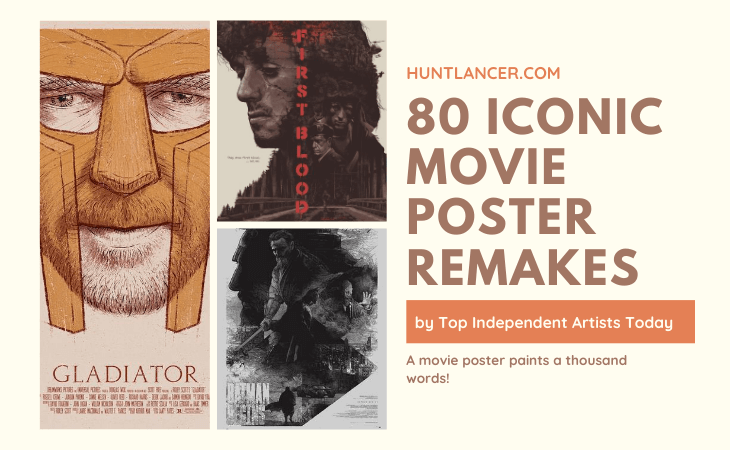 A movie poster paints a thousand words. Or maybe scenes and camera angles to be more precise. The release of a movie poster is not only a form of advertising, but also an artistic snapshot that attempts to encompass the entirety of a movie on one page alone.

Movie posters are compelling, energetic and powerful, and are an artistic medium in and of themselves. They light a fire in the pit of future movie goers’ and film lovers’ stomachs, stirring up excitement and anticipation for the film release, and getting the fans guessing on what will happen in the story.

One of the greatest, most interesting things about movie posters is that there is no strict set of rules that must be abided by to create them. Each composition has its own story to tell, and the artistic styles vary so significantly, making each poster original and an exciting sight to behold.

Each artist we have exhibited presents movie poster remakes and portrays their personal interpretation of the essence of the characters, the lives they live and the genre of the movie, not only displaying their creative prowess, but also their undeniable love for the movies.

Benjamin Terdik is a Hungarian freelance illustrator and poster artist.

Krzysztof Domaradzki is an artist, graphic designer and illustrator from Poznan, Poland. He has recently focused on creating limited editions silkscreened posters either licensed or privately commissioned. He seeks to combine his fondness of drawing, love for film and typography, minimalistic design and attention to detail.

Over the last few years graphic designer and illustrator Richard Davis has gradually built up an impressive client base, from large film studios such as Disney and Twentieth Century Fox to world renowned publishers such as Rolling Stone and Conde Nast. His commercial work has also led him to exhibit in various galleries in Los Angeles, New York, Marseille, Vienna and Zurich as well as published in various design and pop culture publications throughout the world.

Alexey Kot is a freelance illustrator and poster artist from Minsk, Belarus.

Robert Sammelin is a self taught concept artist, illustrator, graphic designer and comics creator. He works as concept Art Director at Embark Studios and makes comics and illustrates on the side.

César is an Illustrator and Art Director from Cancún, Mexico.

Kyle Lambert is an L.A. based artist, who is known for creating illustrated Movie Posters for the entertainment industry. Most notably, Kyle illustrates the iconic key art for Stranger Things, the award winning Netflix series.

Freelance illustrator and poster art creator Ise Ananphada is known for her delicate illustration of women and the female form all presented in a throwback vintage style.

Juan Esteban Rodríguez works as a freelance illustrator in Valencia, Spain. His illustrations have been published through a variety of projects, from film posters and ad campaigns through to editorials and book covers.

Related Post: The Lord of The Rings Fan Art Collection

Flore Maquin is a 29 years graphic artist based in Paris, and passionate about pop culture, design and cinema. She creates revisited movie posters, often in the form of digital painting. She was the creator of the 2018 & 2019 Cannes Film Festival posters.

Indiana Jones and the Last Crusade (1989)

Bartosz Kosowski is an illustrator and poster artist based in Lodz, Poland. Dealing mostly with posters, portraits and editorial illustrations, he has been lucky enough to create award winning posters for numerous films and he has cooperated with such clients as Legendary Pictures, Apple, Canal + and Netflix, just to name a few.

Darya Shnykina is an independent artist and illustrator from Moscow, Russia. Her work has been published in a number of books and publications, as well as exhibited in various galleries and fairs. She also had an opportunity to start her own illustration short course and give a few successful workshops and lectures.

Davide Morettini is an Italian artist, illustrator and painter. His favourite technique is the use of watercolors, which he also uses for creating editorial illustrations for magazines such as The New Yorker.

Paul Shipper is a freelance illustrator best known for producing key art and imagery for film, entertainment and advertising. While remaining constant to his ‘retro’ vision, the artwork he creates has a modern appeal which is beneficial to his growing client base. His illustrative art is used by studios such as CBS, Disney, El Rey, Fox, ITV, Lucasfilm, Marvel, Netflix, Universal, Warner Bros.

Robert Cybulski is a Polish graphic designer and photographer who designs brands, does website layouts, prepares sales presentations, posters and promotional materials for companies. Apart from his work, he also creates digital illustration and photography.

Ignacio is a Spanish freelance illustrator whose work is mainly focused on cinema and pop culture.

Grzegorz Domaradzki, aka ”Gabz” is a Polish graphic designer, creator of posters and illustrations, art and cinema enthusiast. He has been creating alternative posters for various blockbusters in the world of cinematography.

Emma Bevan is a freelance graphic designer and illustrator with a strong sense of urgency and a genuine love and passion for creative designing.

Tom Haugomat is an illustrator based in Paris, France. His works have been shown in prestigious publications such as XXI and Le Monde.

Portuguese illustrator and graphic designer operating under the monicker Daʊs. He has been trained in most analogue and digital image-making techniques, having developed a special interest in creating album artwork and experimenting with augmented reality.

Petter Schölander is a 3D artist, animator and graphic designer from Sweden but living in London. Some of his recent clients include Universal Music Group, Google, The Stanley Kubrick Estate, The Design Museum and Interscope Records.

Harry Potter and the Philosopher’s Stone (2001)

Mirna Akram is a graphic designer and product designer based in Cairo, Egypt.

Ladislas Chachignot is a freelance artist working as an illustrator and digital artist who worked with clients such as Adobe, Make Up For Ever, Red Bull, Wired Magazine and Universal Music France.

Ryan Smallman is an independent illustrator, designer and comic book artist based in São Paulo, Brasil.

Julien is a French graphic designer and poster artist.

From 1950s vintage, to minimalism, to vibrant comic book style, to monochrome; our artists couldn’t be more different in their movie poster remakes, but they are unified in their exquisite interpretations of the world’s favourite movies that give us a mouth-watering taste of what to expect in the cinema.